Jan. 26, 2018:  Amateur astronomer Scott Tilley has a hobby: He hunts spy satellites. Using an S-band radio antenna in Roberts Creek, British Columbia, he regularly scans the skies for radio signals from classified objects orbiting Earth. Since he started 5 years ago, Tilley has bagged dozens of secret or unlisted satellites. “It’s a lot of fun,” he confesses.

Earlier this month, Tilley was hunting for Zuma–a secretive United States government satellite lost in a launch mishap on Jan. 8th–when a J-shaped curve appeared on his computer screen. “It was the signature of a lost satellite,” he says, “but it was not Zuma.”

In a stroke of good luck that has dizzied space scientists, Tilley found IMAGE, a NASA spacecraft that “died” more than 10 years ago.

An artist’s concept of IMAGE flying over Earth’s north pole.

Short for “Imager for Magnetopause-to-Aurora Global Exploration,” IMAGE was launched in 2000 on a flagship mission to monitor space weather. Mapping the ebb and flow of plasma around Earth, IMAGE was able to watch our planet’s magnetosphere respond almost like a living organism to blasts of solar activity, while its ultraviolet cameras took gorgeous pictures of Earth’s global auroras.

“It had capabilities that no other spacecraft could match–before or since,” says. Patricia Reiff, a member of the original IMAGE science team at Rice University.

IMAGE was in the 5th year of its extended mission on Dec. 18, 2005, when the spacecraft suddenly went silent. No one knows why, although suspicions have focused on a power controller for the spacecraft’s transponder, which might have temporarily failed.

The one hope was a reboot: When IMAGE’s solar-powered batteries drained to zero during a eclipse by the Earth, onboard systems could restart and begin transmitting again. “If revival occurs, the mission should be able to continue as before with no limitations,” noted NASA’s IMAGE Failure Review Board in their 2006 report.

A deep eclipse in 2007, however, failed to produce the desired result. “After that, we stopped listening,” says Reiff.

That is, until Scott Tilley started looking for Zuma. “When I saw the radio signature, I ran a program called STRF to identify it,” he says. Developed by Cees Bassa, a professional astronomer at the Netherlands Institute for Radio Astronomy, STRF treats Earth-orbiting satellites much like binary pulsars–deducing their orbital elements from the Doppler shifts of their radio signals. “The program immediately matched the orbit of the satellite I saw to IMAGE. It was that easy,” says Tilley.

Sometime between 2007 and 2018–no one knows when–IMAGE woke up and started talking. Now, NASA has to find a way to answer.

“The good news is, NASA is working on a recovery plan,” says Reiff. “UC Berkeley still has a ground station that was used for realtime tracking and control. They are scrambling to find the old software and see it they can get the bird to respond. Apparently there are data side lobes on the transmission, so that is a good sign.”

Researchers would love to have IMAGE back. The spacecraft has a unique Big Picture view of Earth’s magnetosphere and “its global-scale auroral imager would be fantastic for nowcasting space weather,” says Reiff. “Fingers crossed!!”

Jan. 25, 2018: On Wednesday, Jan. 31st, there’s going to be a “Blue Moon”–the second full Moon in a calendar month. People who go outside to look may see a different hue: bright orange. This Blue Moon is going to be eclipsed, swallowed by copper-colored shadow of Earth for more than an hour. The eclipse will be visible from Asia, Australia, and most of North America: visibility map.

The bright orange color of the eclipse may be chalked up to volcanic activity–or rather, lack thereof. Atmospheric scientist Richard Keen from the University of Colorado explains:

“During a lunar eclipse, most of the light illuminating the Moon passes through Earth’s stratosphere where it is reddened by scattering,” he says. “If the stratosphere is loaded with dust from volcanic eruptions, the eclipse will be dark. The cataclysmic explosion of Tambora in 1815, for instance, turned the Moon into a dark, starless hole in sky during two subsequent eclipses.”

But Earth is experiencing a bit of a volcanic lull. We haven’t had a major volcanic blast since 1991 when Mt Pinatubo awoke from a 500 year slumber and sprayed ten billion cubic meters of ash, rock and debris into Earth’s atmosphere. Recent eruptions have been puny by comparison and have failed to make a dent on the stratosphere. To Keen, the interregnum means one thing: “This eclipse is going to be bright and beautiful.”

Keen studies lunar eclipses because of what they can tell us about Earth’s energy balance. A transparent stratosphere “lets the sunshine in” and actually helps warm the Earth below. “The lunar eclipse record indicates a clear stratosphere has contributed about 0.2 degrees to warming since the 1980s.”

“Mt. Pinatubo finished a 110-year episode of frequent major eruptions that began with Krakatau in 1883,” he says. “Since then, lunar eclipses have been relatively bright, and the Jan. 31st eclipse should be no exception.”

In the USA, the best time to look is during the hours before sunrise. Western states are favored: The Moon makes first contact with the core of Earth’s shadow at 3:48 am Pacific Time, kicking off the partial eclipse. Totality begins at 4:52 am PST as Earth’s shadow engulfs the lunar disk for more than an hour. “Maximum orange” is expected around 5:30 am PST. Easternmost parts of the USA will miss totality altogether.

“I welcome any and all reports on the brightness of this eclipse for use in my volcano-climate studies,” says Keen.  While actual brightness measurements (in magnitudes) made near mid-totality are most useful, I can also make use of Danjon-scale ratings. Please be sure to note the time, method, and instruments used in your reports.” Observations may be submitted here. 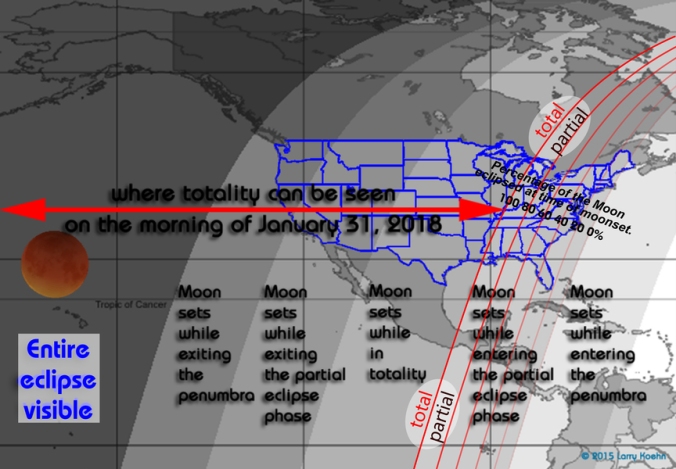 Jan. 22, 2018: For years, Spaceweather.com and the students of Earth to Sky Calculus have been flying balloons to the stratosphere to monitor cosmic rays penetrating Earth’s atmosphere. Lately, we’ve been flying the same payloads onboard airplanes. We want to map Earth’s radiation environment at aviation altitudes where millions of people are routinely exposed to elevated levels of cosmic rays.

Recently we encountered an interesting feature in data taken over the Pacific Ocean: a “radiation bowl.” On Nov. 30th, 2017, Hervey Allen, a computer scientist at the University of Oregon, carried our radiation sensors onboard a commercial flight from San Francisco, California, to Auckland, New Zealand: map. As his plane cruised at a nearly constant altitude (35,000 ft) across the equator, radiation levels gracefully dipped, then recovered, in a bowl-shaped pattern: 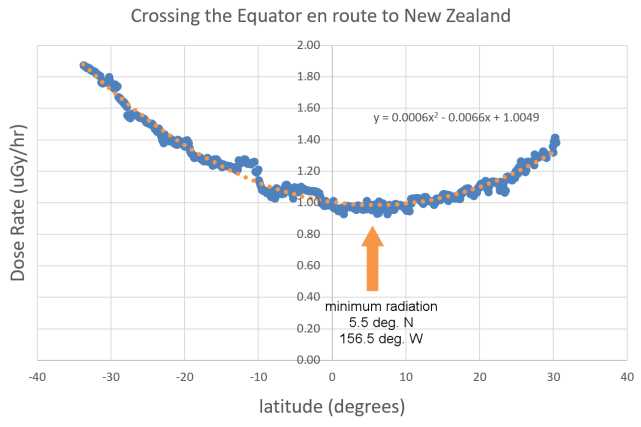 In one way, this beautiful curve is no surprise. We expect dose rates to reach a low point near the equator, because that is where Earth’s magnetic field provides the greatest shielding against cosmic rays. Interestingly, however, the low point is not directly above the equator. A parabolic curve fit to the data shows that the actual minimum occurred at 5.5 degrees N latitude.

Is Earth’s “radiation equator” offset from the geographic equator? Very likely it is. Earth’s magnetic field is tilted with respect to Earth’s spin axis and, moreover, there are many inhomogeneities in our planetary magnetic field that may create radiation zones of interest in unexpected places.

We are now planning additional trips across the equator to map the band of least radiation girdling our planet. In fact, we are working on a dataset now that includes an equator-crossing between the USA and Chile. Stay tuned for updates.

Jan. 14, 2018: In August 2016, geologist Lee Allison, the director of the Arizona Geological Survey, passed away. On Dec. 31, 2017, the students of Earth to Sky Calculus flew his ashes to the stratosphere using a robotic ash scatterer. The space weather balloon flight, which also gathered data on atmospheric radiation, was sponsored by Lee’s wife Ann Becker to honor Lee and mark the sky-high impact he had on colleagues, students, friends and family.

“Lee was always interested in space,” says Ann, “and like a lot of us who grew up with the space program, he always wanted to go into space. Funding a balloon flight and spreading his ashes in the stratosphere are definitely things he would have appreciated.

“I grew up in central Wyoming. Our 9th grade earth science teachers conducted field science programs (geology and botany mostly) in the summer. I think science programs outside the normal school day can change a young person’s trajectory. They certainly changed mine. Ultimately I studied geophysics and earned a PhD in seismology.

“I remember something my high school senior year AP calculus teacher said (1969, right after the Apollo 11 mission): that the boys in the class were the astronauts of the future, and the girls would be their wives and support them. I’m pleased that times have changed, pleased that there are programs like Earth to Sky Calculus that make it easier for young women to not bury their intelligence or interests because society says they’re supposed to.

“Lee always supported women in geology,” concludes Ann. “He was one of the founding members of the Salt Lake chapter of the Assn for Women Geoscientists. A STEM program like Earth to Sky Calculus is one he would support.”