May 6, 2018:  On Saturday, May 5th, a stream of solar wind engulfed Earth, sparking G1 and G2-class geomagnetic storms through the weekend. High atop Earth’s atmosphere, hot ribbons of plasma began to flow through our planet’s magnetic field. Suddenly, STEVE appeared. Alan Dyer photographed the mauve ribbon of light over Gleichen, Alberta: 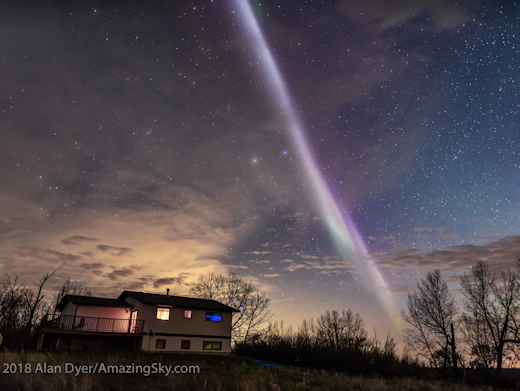 “STEVE, the strange auroral arc, put in quite the appearance on Sunday night, with a fine show over southern Alberta lasting about an hour,” says Dyer. “It started as a faint arc in the east, then intensified, cutting across the entire sky.”

STEVE (Strong Thermal Emission Velocity Enhancement) was discovered by sky watchers in Alberta only a few years ago, although the phenomenon was surely active long before. The narrow ribbon is related to auroras, but has a distinct shape, color, and habitat. Researchers are now beginning to understand STEVE as a manifestation of hot plasma currents in the upper atmosphere.

Elizabeth MacDonald of NASA’s Goddard Space Flight Center recently published a paper on STEVE. In it, they link STEVE to a phenomenon called “subauroral ion drifts” (SAIDs). Satellites have tracked thousands of SAIDs: They tend to appear most often during spring and fall and seem to prefer latitudes near +60 degrees. 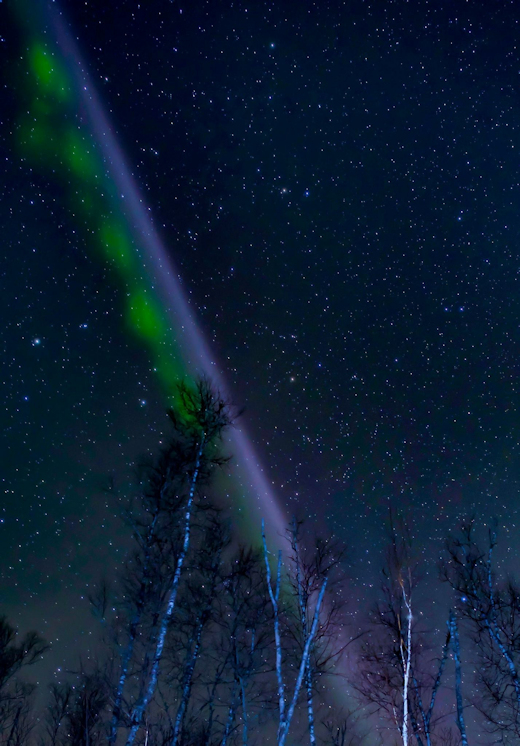 “As you can imagine, I was totally stoked,” says Ash. “This was my first STEVE sighting and it was unforgettable. It was visible with the naked eye and I could see the pulsations of green with the purple.”

Elsewhere, STEVE was sighted in Tofte, Minnesota (+47.6N), Buxton, North Dakota (+47.6 N), Arcadia, Michigan, (+44.5N) and Fort Frances, Ontario (+48.6N). These relatively low latitude apparitions are an encouraging sign for sky watchers who wish to see the strange ribbon for themselves. You don’t have to travel to the Arctic Circle to meet STEVE. He might be coming to you. Free: Aurora Alerts.