May 24, 2018: Strange but true: You can learn a lot about Earth’s climate by watching a lunar eclipse. This week at the 46th Global Monitoring Annual Conference (GMAC) in Boulder, CO, climate scientist Richard Keen of the University of  Colorado announced new results from decades of lunar eclipse monitoring.

“Based on the color and brightness of recent eclipses, we can say that Earth’s stratosphere is as clear as it has been in decades. There are very few volcanic aerosols up there,” he explains. This is important, climatologically, because a clear stratosphere “lets the sunshine in” to warm the Earth below. 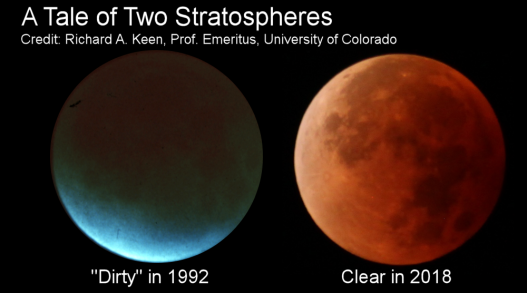 To illustrate the effect that volcanic aerosols have on eclipses, Keen prepared a side-by-side comparison (above) of a lunar eclipse observed in 1992 after the Philippine volcano Pinatubo spewed millions of tons of gas and ash into the atmosphere vs. the latest “all-clear” eclipse in January 2018.

“Compared to the murky decades of the el Chichon and Pinatubo, the clear stratosphere since 1995 has allowed the intensity of sunlight reaching the ground to increase by about 0.6 Watts per square meter,” says Keen. “That’s equivalent to a warming of 1 or 2 tenths of a degree C (0.1 C to 0.2 C).”

“In other words,” he adds, “over the past 40 years, the decrease of volcanic aerosols and the increase of greenhouse gases have contributed equally to the total warming (~0.3 C) observed in global satellite temperature records.” 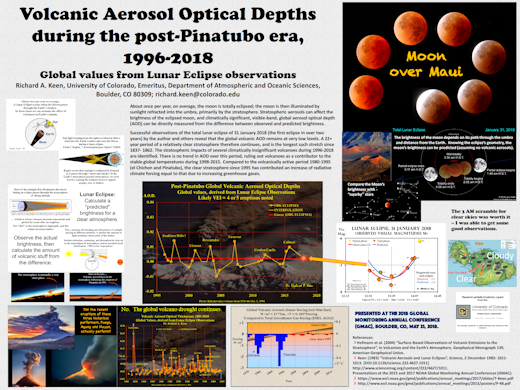 Total lunar eclipses happen somewhere on Earth typically once or twice a year. Keen is looking forward to the next one on July 27, 2018, which will be the longest lunar eclipse of the century. The Moon will pass almost directly through the middle of Earth’s shadow, remaining inside for 1 hour and 43 minutes. That’s just a few minutes shy of the theoretical maximum.

“This will give us plenty of time to measure the color and brightness of Earth’s shadow and, thus, the aerosol content of the stratosphere,” says Keen.

For more information about lunar eclipses and climate change, check out Keen’s poster from the GMAC.