Here’s what most news stations did not report: A pair of tiny satellites were tucked inside the rocket, and they were successfully deployed as well. Built by students at UCLA, ELFIN-A and ELFIN-B are now orbiting Earth, monitoring the ebb and flow of “killer electrons” around our planet. 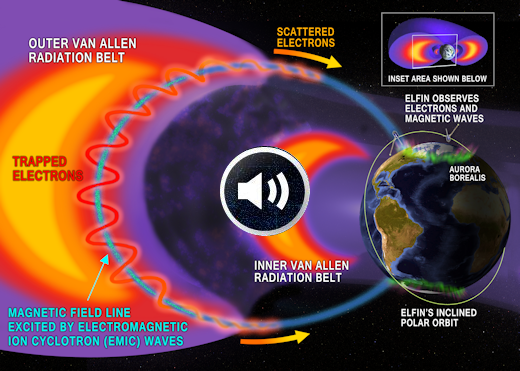 That may sound like ordinary static, but the signal is full of meaning. As mission controllers turn on ELFIN’s science instruments, the static-y waveforms will carry unique information about particles raining down on Earth from the inner Van Allen Radiation Belt.

“Sensors onboard our two cubesats detect electrons in the energy range 50 keV to 4.5 MeV,” says Caron. “These are the so-called ‘killer electrons,’ which can damage spacecraft and cause electrical disruptions on the ground. They also give rise to the majestic aurora borealis.”

“ELFIN is doing something new,” says Vassilis Angelopoulos, a UCLA space physicist who got his doctorate at UCLA and serves as ELFIN’s principal investigator. “No previous mission was able to measure the angle and energy of killer electrons as they rain down on Earth’s atmosphere. ELFIN will help us investigate how disturbances called ‘Electromagnetic Ion Cyclotron waves’ knock these electrons out of the Van Allen Belts and scatter them down toward Earth.”

ELFIN-A and ELFIN-B are cubesats, each weighing about eight pounds and roughly the size of a loaf of bread. They are remarkable not only for their cutting edge sensors, but also for their origin. The two satellites were almost completely designed and built by undergraduate students at UCLA. Working for more than 5 years, a succession of 250 students created the two Electron Losses and Fields Investigation CubeSats –“ELFIN” for short.

“Just seeing all the hundreds of hours of work, the many sleepless nights, the stressing out that you’re not going to make a deadline — just seeing it go up there … I’m probably going to cry,” says Jessica Artinger, an astrophysics major and geophysics and planetary science minor who helped build the satellites and witnessed their launch.

The ELFIN website has interactive tools so the public can track and listen to the spacecraft as it passes overhead twice a day. The CubeSats are expected to remain in space for two years, after which they will gradually fall out of orbit and burn up in the atmosphere like shooting stars.

ELFIN has been supported with funding from the National Science Foundation and NASA, with technical assistance from the Aerospace Corporation among other industry partners and universities.