May 28, 2019:  SpaceX has an idea: Surround the Earth with 12,000 satellites and provide broadband internet to every corner of the globe. The project is called Starlink–and it’s getting started. The first 60 Starlink satellites were launched on May 23rd, creating a train of bright lights in the night sky. “It was one of the most spectacular things I have every seen,” reports Marco Langbroek of Leiden, the Netherlands, who made this video the night after the launch: 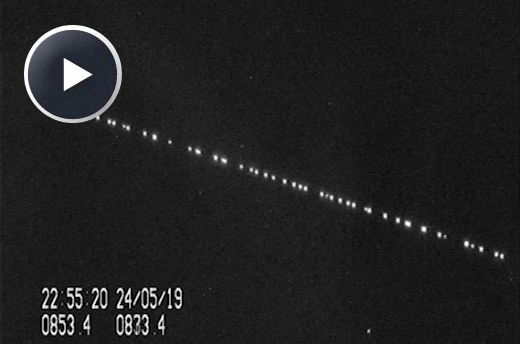 “I could see the entire train of satellites with the unaided eye,” he says.

Since then, sky watchers have been catching the “Starlink Train” — often by accident. “I saw it last night around 9:30 pm in Piseco, New York,” reports Christopher Hayes. “I just happened to look up at the right moment. Thanks to Spaceweather.com I knew what it was, but anyone who didn’t know would have been in for quite a surprise. It was such an amazing sight!”

The Train no longer looks as it did on the first night. Individual satellites are fading in brightness as they move out into their operational orbits. A typical urban sighting now consists of only 4 to 6 naked-eye objects interleaved by dozens of fainter satellites best seen through binoculars.

The Train is still worth catching, however, because the satellites are flaring. Sunlight is glinting off flat surfaces on the satellites’ bodies, creating flashes of light that can briefly rival the brightest stars in the sky. Here are two flares photographed on May 26th by Bill Keel, an astronomy professor at the University of Alabama:

“I saw a pass of the Starlink Train about 15 degrees from zenith over Tuscaloosa,” says Keel. “Some of them showed very systematic flaring, flashing brightly at nearly the same location in the sky. The brightest flares reached a magnitude of -2 for about 5 seconds.” For reference, that’s 50% brighter than Sirius, the brightest star in the sky.

On May 27th, George Varros photographed a cluster of 4 flares over Mt. Airy, Maryland. “I could see them despite horrible conditions–clouds, humidity, airplanes everywhere. This was a real treat visually!”

The flares are pretty, but some astronomers are concerned. Will 12,000 artificial stars criss-crossing the night sky, sometimes flaring, make deep-sky observing impossible? It’s an important question. Keel speculates that the regularity of the flares he observed might mean they’re predictable, in which case, big telescopes could learn to avoid them. We’ll find out soon enough as SpaceX plans to launch at least two more trains this year.

Ready to see the Starlink Train with your own eyes? Visit Heavens-Above.com and click on “Starlink (leader)” for local flyby predictions. A dynamic display of the satellites’ current location is also available.