July 1, 2019: Residents of Chile and Argentina are about to witness a rare total eclipse of the sun. On July 2, 2019, the new Moon will pass across the solar disk, creating a black hole in the sky just before sunset in the two South American countries. This animated map, created by space artist Larry Koehn, includes a local timetable of events: 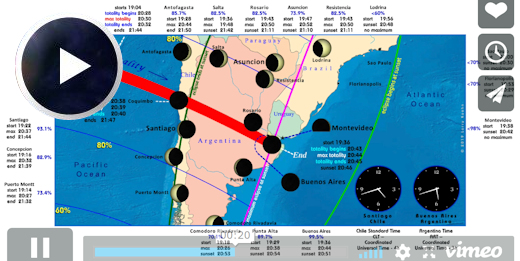 The path of totality cuts across ESO’s La Silla Observatory in Chile and barely misses the center of Buenos Aires in Argentina. The Moon’s elongated sunset shadow will swallow observers for 1 to 2 minutes depending on their exact location.

Outside the path of totality, the eclipse is partial with significant coverage in large cities such as Santiago, Chile (93%); Montevideo, Uruguay (94%); La Paz, Bolivia (63%); and Lima, Peru (54%). During the partial phase of the eclipse, the sun looks like a crescent, and it casts crescent-shaped shadows on the ground. South Americans should look for them underneath the canopies of leafy trees. Using safe eclipse glasses, it is possible to view the crescent sun directly.

The sun and Moon align for an eclipse once or twice every year. Aligning directly over a major observatory, however, is very rare. This video shows what the eclipse will look like over La Silla:

La Silla is home to some of the world’s biggest telescopes and many skilled observers. Observatory staff will host more than a thousand members of the public in a viewing party among the telescope domes. A live high-definition webcast of the eclipse will be available on ESO’s website and on ESO’s Youtube Channel. The action begins on Tuesday, July 2nd. Stay tuned!

More live webcasts: from Chile; from Argentina; from La Silla.