Dec. 24, 2019: Solar Cycle 25 really is coming. Today, for the first time, there are two new-cycle sunspots on the solar disk–one in each hemisphere. This map of solar magnetic fields from NASA’s Solar Dynamics Observatory shows their location: 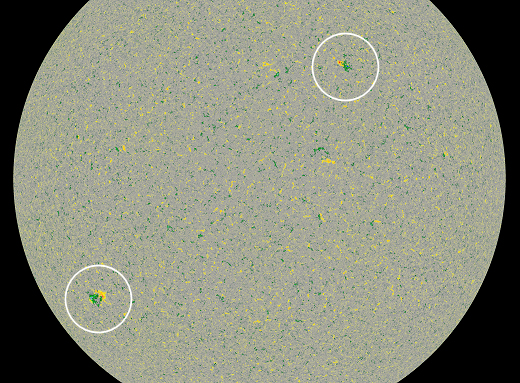 We know these sunspots belong to the next solar cycle because of their magnetic polarity. Simply put, they are backwards. According to Hale’s Law, sunspot polarities flip-flop from one solar cycle to the next. During old Solar Cycle 24, we grew accustomed to sunspots in the sun’s southern hemisphere having a -/+ pattern. However, look at today’s southern sunspot: 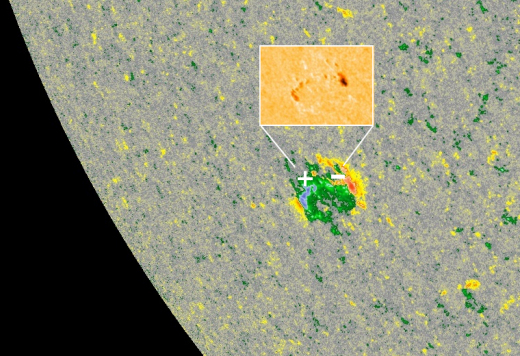 It is the opposite: +/-. This identifies it as a member of new Solar Cycle 25.

Likewise, today’s northern sunspot has a reversed polarity compared to northern spots from old Solar Cycle 24. It, too, therefore, belongs to Solar Cycle 25.

The sun is currently in Solar Minimum–the nadir of the 11-year sunspot cycle. It’s a deep Minimum, century-class according to sunspot counts. The scarcity of sunspots has been so remarkable that it has prompted discussion of a possible “extended Minimum” akin to the Maunder Minimum of the 17th century when sunspots were absent for decades. Such an event could have implications for terrestrial climate.

Today’s new-cycle sunspots (along with isolated new-cycle spots earlier this year) suggest that the solar cycle is, in fact, unfolding normally. A new Maunder Minimum does not appear to be in the offing. Forecasters expect Solar Cycle 25 to slowly gain strength in the years ahead and reach a peak in July 2025.