Feb. 28, 2020:  Sometimes grey whales do a funny thing. They strand themselves on beaches for no apparent reason. No injury. No illness. No obnoxious blasts from Navy sonars. They just get lost.

But why? A team of researchers from Duke University and the Adler Planetarium may have found the answer–and it’s a bit surprising. Their study was published in this week’s edition of Current Biology. 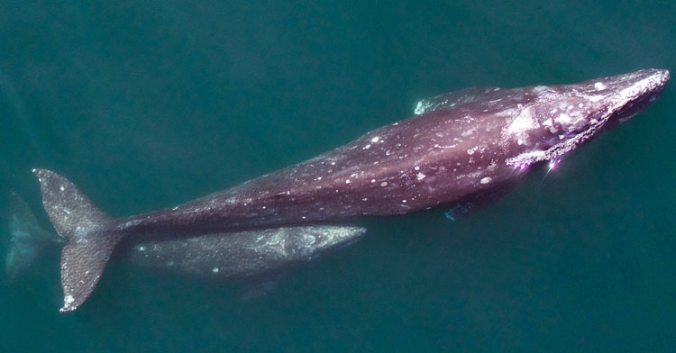 Above: A grey whale and her young. Learn more about this endangered species from NOAA.

But that’s not what the new study shows.

“We were really surprised by our results,” says lead author Jesse Granger, a PhD student in Biology at Duke University.  “Strandings were NOT correlated with geomagnetic activity.” Instead, the best explanation seems to be solar radio bursts.

During periods of high solar activity, the sun emits broadband bursts of radio energy. Many shortwave radio operators have been surprised by a roar of static in their headphones after a strong solar flare. Whales seem to be tuning in as well.

A solar radio burst recorded on May 6, 2019, by Thomas Ashcraft. Listen!

Granger’s team looked at 35 years of grey whale stranding data compiled by NOAA. “We chose grey whales because their species has one of the longest migrations of any mammal and is a near-shore migrator — suggesting that small navigational errors increase the risk of stranding,” they wrote. “Only whales that likely stranded alive with no signs of injury, illness, emaciation, or human interaction (e.g. Navy sonar, entanglement, or boat strikes) were used.”

They correlated the strandings with several long-running indices of solar activity including sunspot number, radio noise (F10.7) and geomagnetic activity (Ap). The results are shown in the histograms below.

According to the statistics, there was a 4.3-fold increase in the likelihood of a stranding on days with high levels of 2800 MHz (F10.7) radio emission. On the other hand, there was NO relationship between the strandings and geomagnetic activity (Ap).

This is an important result, in part because it suggests how whales might be sensing magnetic fields. One possible explanation for magnetoreception in animals is the radical pair mechanism. This is a type of chemical compass in which magnetic fields regulate a chemical reaction involving proteins. In birds, the reaction takes place in the eyeball.

This type of compass can be disrupted by … you guessed it … radio frequency fields. If whales have a radical pair compass, it could completely explain Granger et al.’s results.

The new research could be life-saving as well. “Stranded whales rarely survive–only if they are found in time by groups that have the resources to re-float them,” notes Granger. “Using this correlation we may be able to make better predictions about when whales are at a higher risk of live stranding, and have the stranding networks be more active during those time periods.”

Given the recent troubles of grey whales, they need all the help they can get.

2 thoughts on “The Surprising Way Solar Storms Can Beach Whales”