May 20, 2020: NASA’s AIM spacecraft has detected a noctilucent cloud (NLC) inside the Arctic Circle–the first of the 2020 summer season. It is the blue puff in this satellite image of the North Pole: 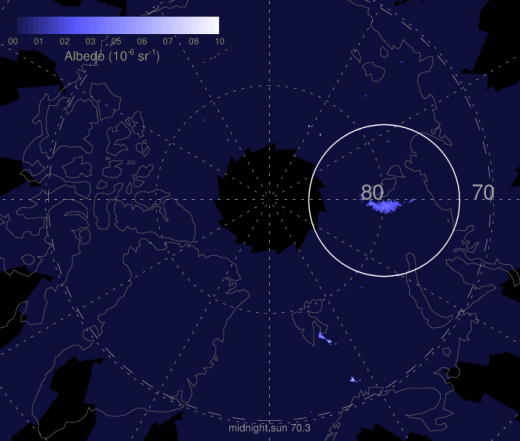 The detection on May 17th marks one of the earliest starts in the 14 year history of the spacecraft. “In previous years, we have seen the first NLCs appear between May 15th and May 27th,” says Cora Randall, a member of the AIM science team at the University of Colorado. “Only once, in 2013 (May 15th), has the northern season started earlier than this.”

NLCs are Earth’s highest clouds. Seeded by meteoroids, they float at the edge of space more than 80 km above the ground. The clouds form when summertime wisps of water vapor rise up to the mesosphere, allowing water to crystallize around specks of meteor smoke. Last summer, they spread as far south as Los Angeles and Las Vegas, setting records for low-latitude sightings.

To find out why NLCs appeared so early this year, Lynn Harvey of the University of Colorado’s Laboratory for Atmospheric and Space Physics looked at data from NASA’s Microwave Limb Sounder (MLS). The following plots show moisture and temperature in the mesosphere for the past 14 years, with 2020 traced in red: 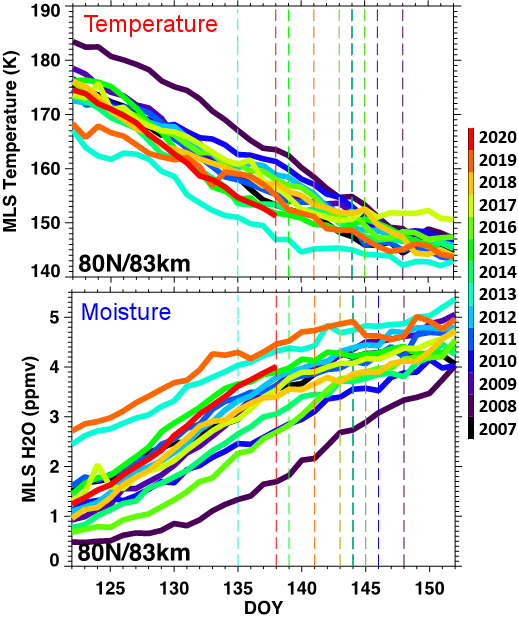 “Between May 1st and May 17th, conditions in the mesosphere significantly cooled and moistened,” says Harvey, “such that 2020 became the second coldest and third wettest year in the AIM record.”

Noctilucent clouds have been likened to a great “geophysical light bulb” because they turn on abruptly, reaching almost full intensity over a period of no more than 5 to 10 days. This means the little blue puff could soon expand to cover most of the Arctic. Stay tuned!