June 9, 2020: It’s getting cold in the mesosphere. Very cold. “At polar latitudes (60N-80N) temperatures have been breaking 14-year records in the last few days,” reports Lynn Harvey of the University of Colorado Laboratory for Atmospheric and Space Physics.  This development is causing noctilucent clouds (NLCs) to spill out of the Arctic to middle latitudes.

“I’ve been waiting for years to see NLCs, and finally it happened!” reports Phil Halpert from London, England, on June 7th. He noticed their electric-blue ripples over local rooftops, then rushed out to photograph them in open sky over Clissold Park: 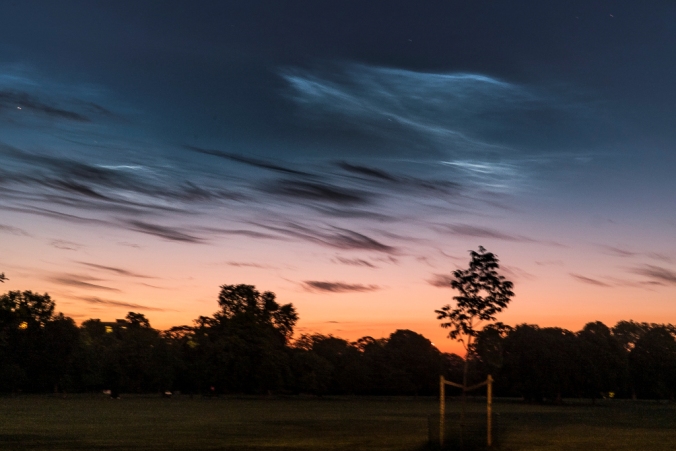 “This is the first time I have ever seen noctilucent clouds over London!” he says.

NLCs are Earth’s highest clouds. Seeded by meteoroids, they float at the edge of space 83 km above the ground. The clouds form when summertime wisps of water vapor rise up to the mesosphere, allowing water to crystallize around specks of meteor smoke. Usually they are best seen after the summer solstice, but this year they are getting an early start.

What’s happening? To find out, Harvey has been looking at data from NASA’s Microwave Limb Sounder (MLS), which can sense conditions 83 km high where NLCs form. “These plots show that 2020 is shaping up to be a cold and wet year in the mesosphere,” she says.

“Temperatures, in particular, are very cold,” she says. “In fact, mid-latitude temperatures (35N-55N) in late May (DOY 142-148) were the coldest of the AIM record”–that is, since 2007 when NASA’s AIM spacecraft began monitoring noctilucent clouds.

Last summer, NLCs spread as far south as Los Angeles and Las Vegas, setting records for low-latitude sightings. The growing chill today suggests this summer could be just as good–or maybe even better. In fact, the first sightings in the continental USA (Washington and Minnesota) have already happened.

Observing tips: The best time to look is during the hours after sunset (or before sunrise) when the sun is more than 6 degrees below the horizon: diagram. If you see electric-blue tendrils spreading across the sky, you may have spotted a noctilucent cloud.