August 17, 2020: You know an explosion is powerful when it lasts for two hours. Yesterday, Aug. 16th (1726 UT), a B1-class solar flare took even longer to unfold. The 2.5 hr blast sent a powerful shock wave rippling through the sun’s atmosphere, shown here in a time-lapse movie from NASA’s Solar Dynamics Observatory:

No sunspot was involved. The explosion occured in a spotless region of the sun’s southern hemisphere. A magnetic filament snapped, hurling debris far and wide. Some of that debris formed the core of a coronal mass ejection (CME), which has escaped the sun and is now billowing into the Solar System.

Coronagraphs onboard the Solar and Heliospheric Observatory (SOHO) are tracking the CME: 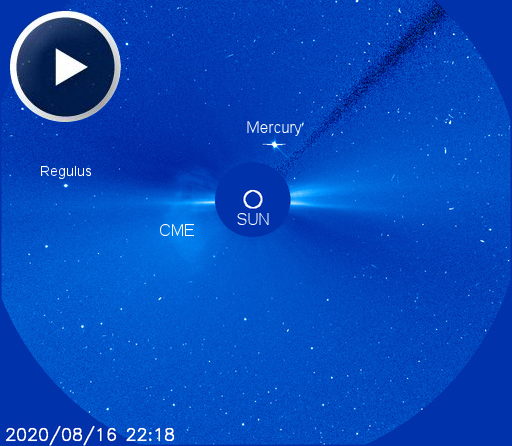 Clearly, the storm cloud is not heading directly for Earth. However, NOAA models of the CME’s trajectory suggest it could deliver a glancing blow to Earth’s magnetic field on August 20th. Minor geomagnetic storms and high-latitude auroras are possible when the CME arrives. Stay tuned. Aurora alerts: SMS Text.