August 25, 2020: NASA’s MAVEN spacecraft has discovered something unexpected on Mars–and researchers are struggling to explain it.

“There is a vast spiral of ultraviolet light over Mars’ South Pole,” says Nick Schneider of the University of Colorado’s Laboratory for Atmospheric and Space Physics. “We understand the origin of the light, but its shape is a mystery.” 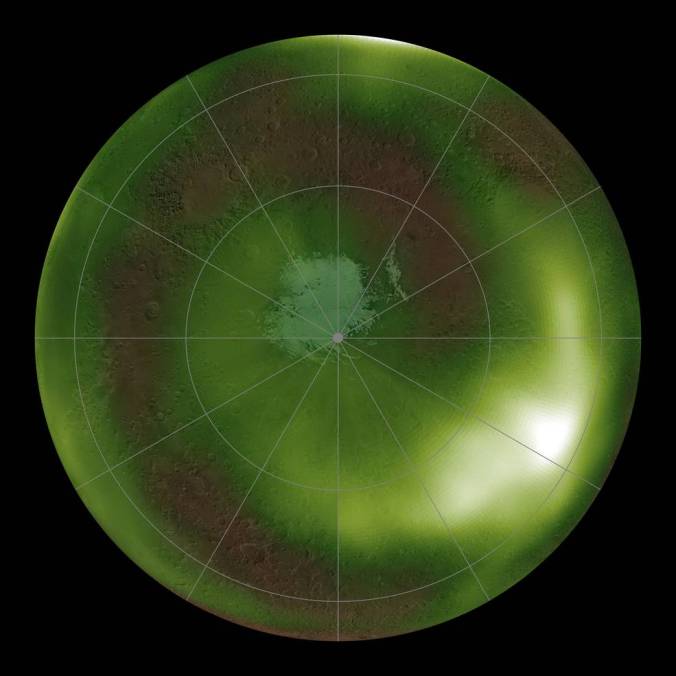 Shown in false-color (green), a spiral of UV light is swirling around the Martian South Pole.

The light is “nightglow.” We have it here on Earth, too, where it’s called “airglow.” During the day, ultraviolet radiation from the sun breaks apart compounds in the upper atmosphere. At night, the atoms reassemble, glowing as they put themselves back together again. On Earth, airglow looks like the aurora borealis; people can actually see it. On Mars, the emission is ultraviolet, invisible to the human eye.

MAVEN has been monitoring Martian nightglow for years, yet the spiral pattern was only recently recognized. Schneider recalls the ‘Eureka moment’: “We were preparing a demo on our lab’s internal projection sphere (like Science on a Sphere), which turned out to be the first time we had plotted the UV glow in polar coordinates. The spiral ‘popped’ and we were all quite giddy.”

The chemistry of Martian nightglow. Nitric oxide (NO) also produces airglow on Earth.

The spiral is just the tip of the iceberg; the whole planet is surrounded by pulsating patterns of nightglow. High above the North Pole of Mars there is a luminous blob that pulses exactly twice a day. And around the equator there are three more blobs, evenly spaced, pulsing three times a day. Only the South Pole has a spiral, and it pulses once a day.

To make sense of it all, Schneider and colleagues “spun up” a general circulation model (GCM) of the Martian atmosphere. (This part of the work was led by Francisco González-Galindo at the Instituto Astrofísica Andalucía.) GCMs are computer programs that model planetary atmospheres. They’re used all the time by weather forecasters on Earth, and planetary scientists have Martian versions as well, complete with accurate values for solar heating, winds, chemistry, cloud formation, and so on.

According to the GCM, nightglow on Mars is shaped by atmospheric tides. The gravity of the sun pulls on the Martian atmosphere, and the atmosphere has a natural response: It essentially rings like a bell three times a day. This accounts for the pulsating blobs around the equator.

Figure 6 of Schneider et al’s recent paper compares MAVEN data (panels a and b) to a GCM model of Martian nightglow (panel c).

“We were really impressed that the Mars General Circulation Model reproduced the equatorial patterns so well,” says Schneider. “The brightest spot hovers above the Martian prime meridian for months at a time, with two fainter spots placed on either side. Pulsating downdrafts at those locations boost the chemical reactions which give rise to nightglow.”

More data from MAVEN and updates to the Mars General Circulation Model might eventually provide an answer. For now, it remains a dizzying mystery.

One thought on “Spiral Lights on Mars”