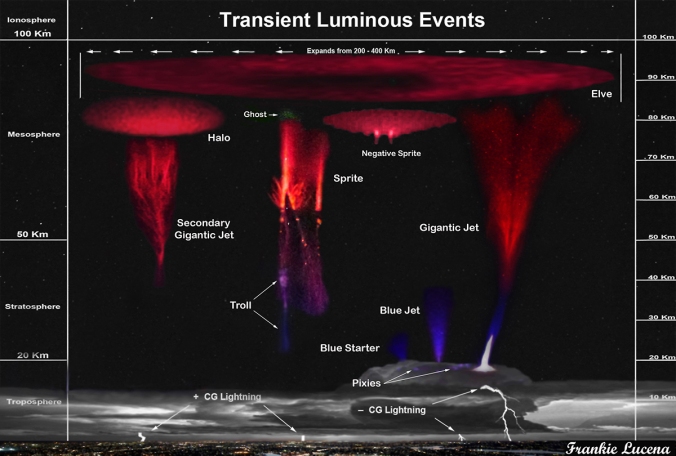 “This chart provides just a glimpse of what can be seen and photographed above very strong thunderstorms,” says Lucena. “I used actual images, enhanced and slightly modified to better show what they actually look like.”

“This is the first chart to show the Ghost and a Negative Sprite event,” he continues. “The Ghost is a green colored shadow that appears above some sprites. The green color is caused by electrons exciting oxygen molecules in the mesosphere, approximately 80 km high. A Negative Sprite is triggered by a -CG lightning discharge as opposed to a regular sprite which is triggered by a +CG lightning discharge.” (Note: CG means “cloud to ground.”)

SPRITES: They initiate between 65 and 85 km in altitude and are typically triggered by a positive cloud-to-ground lightning strike. The streamers first grow downward and then upwards before disappearing. They are mainly red in color but as they grow downward they will transition to purple and then to blue.

HALOS: They are typically triggered by a positive cloud-to-ground lightning strike like sprites and will sometimes appear together with sprites. They initiate at about 80-85 KM and will typically look like a red oval shaped cloud.

TROLLS: They occur during long-lasting sprite events with ongoing lightning activity in the cloud and with long lasting +CG currents to ground. Its hard to link them to a particular cloud-to-ground lightning strike. They are mainly purple in color like the tendrils of a sprite and will transition to blue towards the bottom.

ELVES: They are an electromagnetic pulse that originates at the same time as the cloud-to-ground lightning strike. They project a ring of red light as electrons at the base of the ionosphere excite nitrogen molecules. They typically appear at about 90 Km in altitude and are considered the most common type of Transient Luminous Event.

BLUE STARTERS: A blue starter is an electric streamer discharge that initiates under the screening layer at the cloud top. They start out as a white channel rising from the cloud top that quickly transitions to a blue fan shaped plume as it travels upwards to about 26 Km in altitude. The white channel is rarely seen because they are typically obscured by the cloud.

BLUE JETS: They are often linked to charge removal by negative cloud-to-ground lightning. They initiate under the screening layer at the cloud top and they start out as a bright white channel rising from the top of the storm cloud that quickly transitions to a blue coned shaped plume as it travels upwards to about 40 Km in altitude. The white channel is rarely seen because they are often obscured by the cloud.

GIGANTIC JETS: Unlike Blue Jets and Starters, a Gigantic Jet initiates in the middle of the storm cloud. They start out as a bright white channel rising from the cloud top that quickly transitions to blue and then to red as it climbs as high as 80-90 Km in altitude. They are usually preceded by multiple negative cloud-to-ground lightning and will typically appear during a null in the lightning activity.

NEGATIVE SPRITE: These sprites are similar to regular sprites but are triggered by a negative polarity cloud to ground lightning discharge (-CG). A negative sprite requires a higher Charge Moment Change than a regular sprite and is usually located above the convective core, or the surrounding area, because this is where -CG lightning usually occurs.

GHOST: Newly discovered so little is known. They sometimes appear at the top of a Sprite event and are green in color. The green color is caused by electrons exciting Oxygen molecules high up in the Mesosphere at around ~80 Km.

PIXIES: They are blue emissions of light that are very small in size and usually located either on top or on the outer wall of the convective core of a storm cell.

SECONDARY GIGANTIC JET: They originate from the cloud top, under the shielding area of the preceding sprites, and develop upward to reach the lower ionosphere at ∼90 km. The streamers branch outward towards the top, which is similar to what occurs in a Gigantic Jet event.