March 8, 2020: A new sunspot is emerging in the sun’s southern hemisphere, and it looks like a member of new Solar Cycle 25. Numbered “AR2758,” the sunspot is inset in this magnetic map of the sun’s surface from NASA’s Solar Dynamics Observatory: 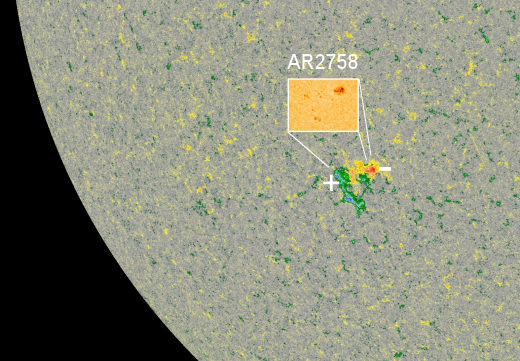 How do we know this sunspot belongs to Solar Cycle 25? Its magnetic polarity tells us so. Southern sunspots from old Solar Cycle 24 have a -/+ polarity. This sunspot is the opposite: +/-. According to Hale’s Law, sunspots switch polarities from one solar cycle to the next. AR2744 is therefore a member of Solar Cycle 25.

Sunspot AR2758 has produced one of the first solar radio bursts of Solar Cycle 25. “I was surprised to see distinct solar radio bursts on my spectrograph this morning,” reports Thomas Ashcraft. Click to play the slow-rolling roar of static that emerged from the loudspeakers of his amateur radio telescope in New Mexico: 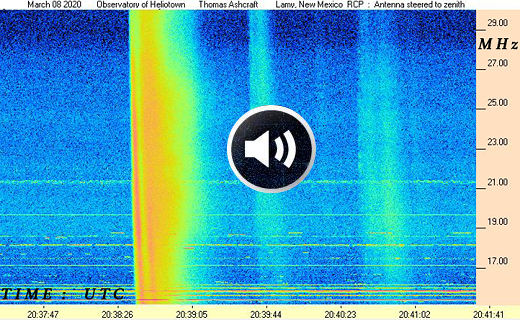 These radio sounds are caused by beams of electrons–in this case, accelerated by unrest in the sunspot’s fast-changing magnetic canopy. As the electrons slice through the sun’s atmosphere, they generate a ripple of plasma waves and radio emissions detectable on Earth 93 million miles away. Astronomers classify solar radio bursts into five types; Ashcraft’s recording captured a mixture of Type III and Type V.

“Even in the height of solar maximum, this would be considered a strong solar burst,” says Ashcraft, who has been listening to solar radio many years. “I am hoping for more!”

Extra: There is growing evidence that solar radio bursts can disorient the navigation of grey whales, causing them to strand on beaches. According to the radical-pair hypothesis of magnetoreception, shortwave bursts such as the one Ashcraft recorded may be especially effective at sending them off course.