March 13, 2020: We’re back from the Arctic, and we have some new results to share. In January 2020, the students of Earth to Sky Calculus and Spaceweather.com traveled to Abisko, Sweden, to launch a pair of cosmic ray balloons. We’d been there before, launching three identical balloons in March 2017. Putting all the data together, 2017+2020, we find that radiation has increased +12% in the past 3 years:

The graph shows radiation dose rate (uGy/hr) vs. altitude (feet) all the way from ground level to the stratosphere. Radiation appears to be increasing at nearly all altitudes–even in the range 25,000 ft to 40,000 ft where airplanes fly. Polar flight crews and passengers are therefore absorbing ~12% more cosmic radiation than they did only a few years ago.

What’s causing the increase? Solar Minimum. At the moment, the sun is near the bottom of the 11-year solar cycle. During Solar Minimum, the sun’s magnetic field weakens, allowing extra cosmic rays from deep space to penetrate the solar system. These cosmic rays are hitting Earth’s atmosphere, creating a spray of secondary cosmic rays that shower toward the ground below.

Secondary cosmic rays are what we measure. Radiation sensors onboard our helium balloons detect X-rays and gamma-rays in the energy range 10 keV to 20 MeV, similar to what you get from medical X-ray machines and airport security scanners. 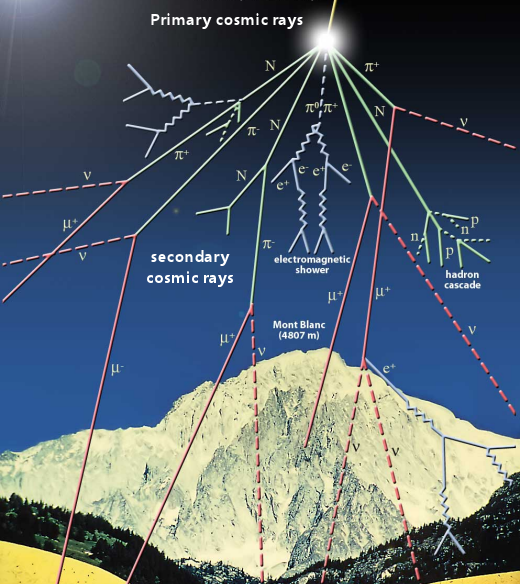 Above: Schematic diagram of a cosmic ray air shower. Learn more from CERN.

We’ve been launching radiation sensors almost weekly for 5 years–mainly from California, the “home base” of Spaceweather.com. Cosmic rays in the stratosphere have been increasing the entire time, a sign of deepening Solar Minimum.

The new data from Abisko, Sweden, show the increase is not limited to the stratosphere. It is also happening at aviation altitudes with a 3-year increase of ~12% even below 40,000 ft. We’re planning another ballooning trip to Sweden in August 2020 to confirm these results. Stay tuned.