Sept. 23, 2019: Could northern summer 2019 go down in history as “the summer without sunspots”? From June 21st until Sept 22nd, the sun was blank more than 89% of the time. During the entire season only 6 tiny sunspots briefly appeared, often fading so quickly that readers would complain to Spaceweather.com, “you’ve labeled a sunspot that doesn’t exist!” (No, it just disappeared.) Not a single significant solar flare was detected during this period of extreme quiet. 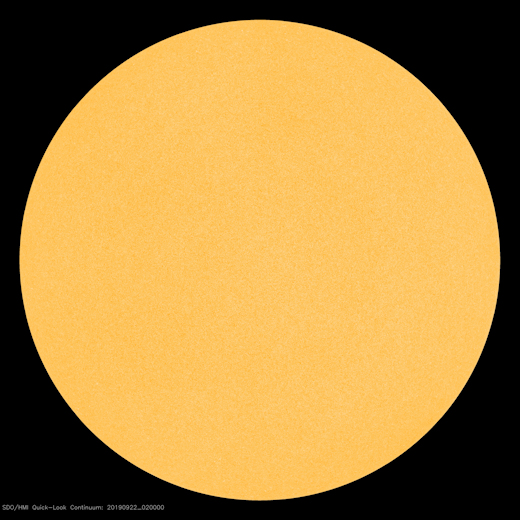 This is a sign that Solar Minimum is underway and probably near its deepest point. For 2019 overall (January through September), the sun has been blank 72% of the time, comparable to annual averages during the century-class Solar Minimum of 2008 (73%) and 2009 (71%). The current Solar Minimum appears to be century-class as well, meaning you have to go back to the beginning of the 20th century to find lulls in solar activity this deep.

Contrary to the sound of it, “Solar Minimum” is not boring. During this phase of the solar cycle, the sun’s magnetic field weakens, allowing cosmic rays to enter the solar system. This doses astronauts and possibly air travelers with extra radiation. The sun also dims, especially at extreme ultraviolet wavelengths, causing the upper atmosphere to cool and collapse. Space junk accumulates in Earth orbit as a result. Finally, streams of solar wind punch through the sun’s weakening magnetic field, lashing Earth with gaseous material that can cause geomagnetic storms. (One such stream is due later this week on Sept. 27-28.)

Interestingly, the summer of 2019 also brought us a sign that Solar Minimum is coming to an end. One of the numbered sunspots that briefly appeared on July 7th had a reversed magnetic polarity: 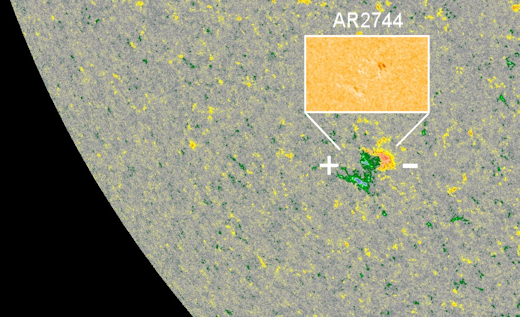 According to Hale’s Law, sunspots switch polarities from one solar cycle to the next. This small summertime sunspot was +/- instead of the usual -/+, marking it as a member of the next solar cycle, Solar Cycle 25. Solar Minimum won’t last forever!

Solar cycles always mix together at their boundaries. We can expect to see more new-cycle sunspots in the months ahead as Solar Cycle 24 dies out and Solar Cycle 25 slowly comes to life. If forecasters are correct, the next Solar Maximum will be in full swing by 2023.