Oct. 2, 2019: When a stream of solar wind hit Earth’s magnetic field last Friday, Sept. 27th, forecasters expected an aurora storm around the Arctic Circle. Turns out, it was more of a “STEVE storm.” Many sky watchers in Scandinavia saw the mauve ribbon of light for the very first time. Göran Strand photographed the event from Handöl, Sweden: 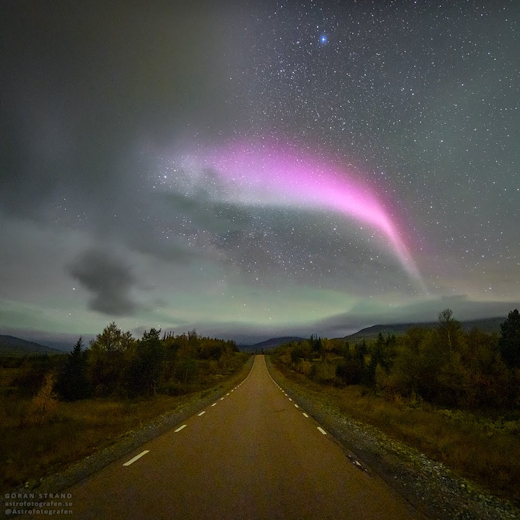 “I finally got to see STEVE,” says Strand, who is a veteran observer of auroras, but had never seen STEVE before. “It all started when I noticed a faint green corona outside our mountain cabin. I grabbed my camera gear and headed out into the night. At my first stop along this road I encountered STEVE.”

STEVE (Strong Thermal Emission Velocity Enhancement) looks like an aurora, but it is not. The phenomenon is caused by hot (3000°C) ribbons of gas flowing through Earth’s magnetosphere at speeds exceeding 6 km/s (13,000 mph). These ribbons appear during some geomagnetic storms, revealing themselves by their soft purple/mauve glow.

STEVE normally appears at latitudes around +50N to +55N, on rare occasions dipping down into the +40s. In this case, however, the sightings were at unusually high latitudes, topping +60N in Handöl, Sweden (+63.3N); Ruovesi, Finland (+62.0N); Turku, Finland (+60.5N) and, if we round up a little, Laguja, Estonia (+58.2N). This event shows that the habitat of STEVE may reach farther north than previously thought. Aurora alerts: SMS Text.